Like all our members, Bristol Women’s Voice believes in a future where there is equality; a world in which all women and girls (men and boys) can access their rights to safety, health and well-being, decision-making power, choice and representation.

In order to end this cycle, we need to change cultural norms as well as change policies and legislation.

Ending male violence against women and girls is a key priority for Bristol Women’s Voice, and for our members.

As part of our work in this, we firmly believe Bristol needs to commit to a city-wide preventative strategy to tackle harmful attitudes, behaviours and gender stereotypes so that women and girls can feel safe – and be safe – in all public and private spaces.

We feel some of the key aspects of a holistic prevention strategy include:

At Bristol Women’s Voice we believe all these actions will help reduce men and boy’s, and many women and girls’, harmful attitudes towards women and girls, from a young age and into adulthood. 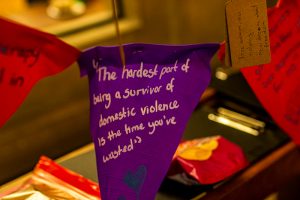 This is as important now as it ever has been: 97% of young women have experienced sexual harassment, one in three women experience male violence at some point in their lives and a woman is killed every three days.

We know that tackling cultural and attitudinal norms is vital if we are to end male violence against women and girls because the link between men’s objectification and men’s violence is well evidenced:

Bristol Women’s Voice on the nil-cap for sexual entertainment venues
Under the Public Sector Equality Duty, the Council has legal obligations to have due regard to the need to eliminate discrimination and harassment of women, and to advance equality of opportunity for women as well as to foster good relations between men and women.

We recognise that closing of clubs will result in unemployment for a limited number of women and men that work in them (as strippers, bar staff and security) which is regrettable. The women involved – many of whom have skills, experience, education and knowledge and should be supported to access training, employment and opportunities outside the sex trade, we will do what we can to support with this.

“The strip club elicits and requires direct expressions of male domination and control over women”. [8]

Regardless of the money women involved make, the Sexual Entertainment Venue business model is one where men temporarily ‘buy’ the bodies of women. Sexual Entertainment Venues are set up to profit from condoning, indeed encouraging, the objectification of women and reinforcement or traditional, gender stereotypical power dynamics that are part of the problematic patriarchal norms we are trying to dismantle to achieve.

Therefore, in line with our Womanifesto, Bristol Women’s Voice cannot ethically or without hypocrisy support their continuation and we support a nil cap on Sexual Entertainment Venues.